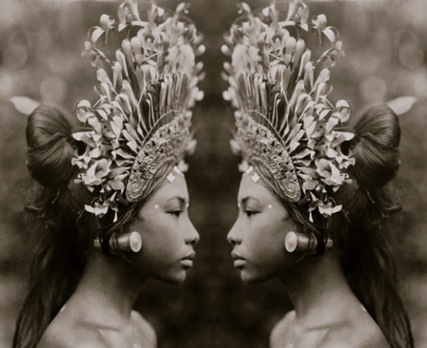 Balinese Traditional Dancer
Bali has a long chain of history from the ice-age era (pre-historic time) to modern, global civilisation era. With a dynamic characteristic indicating selectivity and flexibility, the Balinese culture initially reflects a configuration of an expressive culture dominated by religious, solidarity and aesthetic values. Nowadays, it develops along with the adoption of foreign values especially in the aspects of the economic, science and technology, as a result of the global modernisation.

In general, the history of Bali is divided into three different eras including the pre-historic, the Hindu-Buddhist era and the modern culture.

Pre-historic era in history of Bali

The pre-historic marked the oldest and simplest way of life, an era of hunting and food-stuff gathering, verified by the discovery of several tools and hunting equipments. In the following era there were also building construction system and a particular communication system. These were just proofs of the existence and further development of Balinese culture. The Balinese culture flourished that nowadays one can indicates a perfect bonds between religions, tradition and culture to become the identity of the Balinese community.

Bali Island was first occupied in 3000 is estimated to-2500SM. Bali’s first inhabitants are immigrants from Asia. There is a historical relic stone tools from this period, which is found in the village throttle located on the west of the island. Prehistoric times ended at about the entry of 100SM Hinduism and Sanskrit writings from India.

Since then, Balinese culture is much influenced by Indian culture, where the process of inculturation of Indian culture with the indigenous culture is accelerated After the 1st century AD. From since then, the name Balidwipa (Bali Island) began to be found in various inscriptions, including inscriptions Blanjong charter issued by Sri KesariWarmadewa the 913M and mention Walidwipa said. In this era began to develop estimated irrigation irrigation systems subak, and some religious and cultural traditions of Hinduism.
Around the year 1343 AD, the kingdom of Majapahit (1293 to 1500 AD) which is a Hindu kingdom based in Java, has established a subordinate kingdom of the island of Bali. At that time almost all over the archipelago adoption of Hinduism.But with the arrival of Islam, rise of Islamic kingdoms in the archipelago (one reason for the collapse of Majapahit). When that many nobles, priests, artists, and other Hindu communities who moved to the island of Bali.

Portuguese had washed up near Cape hill, which is in tahuunjimbaran 1585, but the Europeans who first discovered Bali is Cornelis de Houtman from the Netherlands in 1597. Dutch through the East India Company began to implement land occupation in Bali, but continue to get resistance from the people of Bali.

The Dutch seamen were the first Europeans to arrive on Bali and started to introduce western culture in 1597, though they hadn’t discovered any appealing aspect until 1800s.

Starting from the northern region of Bali, since around the year 1840 the Dutch presence has become permanent, which originally began with devideetimpera politics or the political contest pitting sheep Balinese rulers that eventually emerged mutual distrust one another. Dutch major attack by sea and land in Sanur area, and followed by the Denpasar area. Bali party who lost in number and weapons not want to experience shame for surrender, thus causing the war to the death or bellows, which involves all the people both men and women including the king. An estimated 4,000 people died in the incident, although the Netherlands has ordered them to surrender. After that, the Dutch governor in charge do not give meaning to cultural influences, religion and culture so that existing generally unchanged.

Around 1846 the Dutch returned with colonization in their minds, having established a strong political base as majority of the Indonesian islands were under their control since the 1700s. The military campaign embarked from the northern coast of Bali. With the help of Sasak people of Lombok, by 1911, all Balinese principalities were under the Dutch control.

Japan occupied Bali during World War II, and then a military officer named I Gusti Ngurah Rai Bali formed forces called the ‘freedom fighters’. Following the Japanese surrender in the Pacific in August 1945, the Dutch soon returned to Indonesia (including Bali) to re-establish its colonial rule as a state before the war. This was opposed by the opposition forces that Bali is now using Japanese weapons.

On 20 November 1940, fighting broke out Puputan Margarana happened in the village of Marga, Tabanan, Bali middle. Colonel I Gusti Ngurah Rai, a 29-year-old, led his troops from the eastern Bali to take the offensive until the death of Dutch troops are armed to the teeth. All members of the battalion Bali killed everything, and make it as a military resistance Bali last.

The sense of Indonesian nationalism began to grow after the World War I, with the young generation declaring the national language in 1928, known as Bahasa Indonesia. During the height of World War II the Japanese arrived, expelling the Dutch and ruled the country for about 3.5 years, which ended later in 1945 when Indonesia declared independent led by its very first president, Sukarno. Yet the new-born nation was only recognized by the international community as an independent country in 1949.

Mount Agung eruption occurred in 1963, had shaken the people’s economy and caused many of the Balinese transmigration to other areas in Indonesia.
Info Home | Next Page
Share on Facebook