Population and Lifestyle in Bali 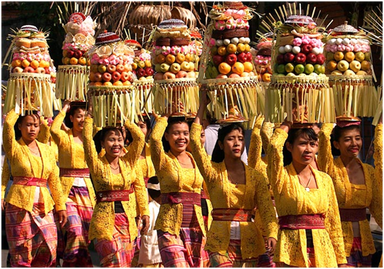 Bali Traditional Ceremony
Bali’s population of over 3,000,000 souls spread over the whole island, including those in the smaller islands of Nusa Penida, Nusa Ceningan, Nusa Lembongan, Serangan and Menjangan Island. The overwhelming majority of Balinese are Hindus, with the increasing number on non-Hindu migrating from the closest neighbouring islands of Java and Lombok.


The coastal areas in the south are the most populous area with over 370,000 people living in various professions in the capital of Denpasar. Farming has been the primary way of living in Balinese life. Where else fishing, trading and craftsmanship are also in fashion from generation to generation. Yet with the fast growing of tourism since past few decades, young people start to build up a new touch in their living culture.

​Life in Bali is very communal under the organisation of villages. Temple ceremonies, marriage, cremation, farming and even the creative art festivals are decided by the local community institution called “Banjar”. The responsibilities in the day-to-day life are normally administered by both the Banjar and the government. The local government mostly responsible for schools, health clinics, hospitals and roads, and Banjar is responsible for all other aspects of life.

There is another association exists in the banjar named “Subak” that concerns to the production of rice and organizes the complex irrigation system. Every family who owns a rice field must be a member of their local Subak, which then ensures that every member gets his fair distribution of water. A banjar consists of an average of 50 to 150 family members, owning a meeting venue called the Bale Banjar, which is used for regular gatherings and a centre for local gamelan orchestras and drama groups.
Info Home
Share on Facebook